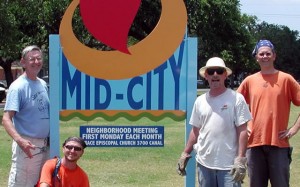 When these two groups joined forces in 1990, their combined efforts lead to continued beautification and improvement in the Mid-City Neighborhood. During the 1990s and early 2000s, Mid-City began to experience an unprecedented renaissance, as young families, couples, and singles purchased and restored the beautiful, historic homes of the area.

We host monthly MCNO Mixers social events where members enjoy special benefits as well as monthly neighborhood meetings on topics of interest to residents. We also publish a regular email newsletter, advocate at City Hall on issues of importance to residents, and support non-profits working to make Mid-City even better. The organization is governed by a Board elected by the membership.

To volunteer or become a member of the Mid-City Neighborhood Organization, reach out to our membership chair or find out more information about Membership.