The meeting was called to order by Jim Taylor, President, at 6:30 p.m. Approximately 30 people were in attendance.
Guests:
Stacy Head, City Council Member, District B
Jake Wagner, UMKC
Nicky Najiola, Gentilly Neighborhood Assn.
I. Pres. Taylor introduced Stacy Head, newly elected councilwoman from District B. She explained the 311 system which is the number for people who need help getting out of the city in an emergency. She asked for a contact person from MCNO to help provide information on elderly and infirm people in the neighborhood who might be in need of assistance during an evacuation. She announced that the Rockefeller Foundation has donated $17,000,000 to assist with planning. Bart Everson and Pattye Brignac volunteered to be the MCNO contact persons to act as a liaison with her office and to provide a “hot list” of neighborhood issues. Councilwoman Head provided her cell phone number and her email address: 504-658-1020; shead@cityofno.com. 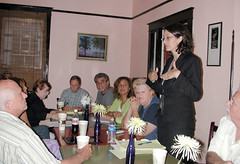