A dozen Mid-City residents attended the City Council meeting yesterday, with beads and signs calling for Endymion to come home to Mid-City. Four people spoke about the economic need, the emotional need, the family nature of the event, the impact on the community, and so forth. The Council has not made the final decision yet, but everybody expressed support for the notion of Endymion returning to its traditional Mid-City route.

Doug gave a presentation including the economic need in Mid-City, the lack of economic need Uptown, and the past cooperation of Endymion and MCNO with moves previous Uptown. He also expressed our dismay over the negative comments about Mid-City’s recovery progress when Mid-City is one of the furthest along in its recovery…
Fielkow, Midura, Willard-Lewis & Carter all commented in favor Endymion parading in MidCity. One or two stated specifically that now the National Guard et al are remaining in the city, they saw no reason bringing Endymion home couldn’t be figured out to everyone’s satisfaction. Hedge-Morrel was absent and Thomas refrained from commenting but said “watch my vote…”
Thought it was interesting that the Kobe presentation, which preceeded MCNO’s, pointed out that community-building is a vital part of a neighborhood’s recovery from disaster. Specifically that giving neighborhoods “win’s”, things residents want but aren’t necessarily easy to provide or obvious parts of the recovery, is important…
I’d strongly suggest that our next step is to email, call, write the council. Thank them for their support, for listening to us… And work in to your thanks how important this “win” is for MidCity and the surrounding neighborhoods… 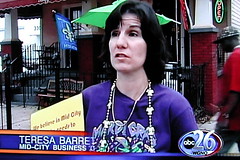 The appearance garnered a bit of media attention. Glen Boyd of ABC 26 News interviewed Doug Pease and Therese Barret of Bayou Coffee House. The story was also covered by Fox 8 and made the front page of today’s Times-Picayune:

Council backs Mid-City parade’s return
Endymion boost to economy, locals say
Friday, December 15, 2006
By Bruce Eggler
Staff writer
Let the good times — and the city’s largest Carnival parade — roll in Mid-City, the New Orleans City Council declared Thursday.
Despite opposition from the Police Department, council members were unanimous in supporting the return of the superkrewe of Endymion to its traditional Mid-City parade route in February, rather than following an Uptown route for a second straight year.
“I am 100 percent for bringing this back to the traditional route,” Councilman Arnie Fielkow said. “Let’s get the numbers” on how much it would cost the city to allow use of the route “and figure out a way to make this happen,” he said.
“You have my support,” Councilman James Carter told a group of Mid-City residents at Thursday’s council meeting. The residents said both the morale and the economy of Mid-City would benefit if Endymion, one of the most popular Carnival parades, returns to their neighborhood next year.
“We need this parade back,” Therese Barrett said. “The city needs to believe in us and bring this parade home.”
Moved across town
On Oct. 31, the Police Department told Endymion it would have to parade in 2007 on the same St. Charles Avenue route as all other east bank krewes.
Endymion would prefer to parade in Mid-City, starting on Orleans Avenue near City Park and proceeding downtown on Canal Street, but police officials said the department doesn’t have enough officers to guard both the Uptown and Mid-City routes on the Saturday before Fat Tuesday.
Iris and Tucks, two krewes that parade earlier in the day, balked when initially told they would have to join Endymion in Mid-City in 2007 rather than follow their usual Uptown route, and Mayor Ray Nagin sided with them, leading to the Police Department decree that Endymion then would have to roll Uptown as well.
Endymion paraded Uptown in 2006 because of a lack of money for police overtime as well as flood damage in Mid-City.
Similar factors will apply in 2007, Police Superintendent Warren Riley said last month, and modifications to traditional routes and start times will still be necessary so police can ensure the best protection for parades and revelers.
Larger crowds expected
This year’s Carnival crowds were about 70 percent the size of those before Hurricane Katrina, and next year’s crowds should be larger, Riley said, but NOPD staffing is down sharply.
“The Mid-City area, with all of the blight and with the abandoned houses, makes it a lot harder to control what’s going on,” Riley said last month. “We certainly wouldn’t want to see some kid getting pulled into some abandoned building.”
Douglas Pease, a board member of the Mid-City Neighborhood Organization, rejected that argument. He told the council that his neighborhood has plenty of residents and open schools and churches, but that it needs additional economic activity.
The return of Endymion would be a strong economic boost and also would raise residents’ spirits, he said, adding that hundreds of Mid-City residents have signed petitions supporting the parade’s return.
Noting that state Commissioner of Administration Jerry Luke LeBlanc said Wednesday that 60 State Police officers and a rotating contingent of 300 National Guard troops will remain in New Orleans through June, Pease said there are more law enforcement officers in the city now than before Katrina, and they should be able to handle two parade routes.
Councilwoman Stacy Head agreed, saying the state’s commitment should quell any security fears.
“We must ask the Police Department to tell us what they need to make this happen,” said Councilwoman Shelley Midura, who put the issue on the council’s agenda. “We at least need to give it a fair shot to make this happen.”
Council President Oliver Thomas and Councilwoman Cynthia Willard-Lewis also indicated their support for letting Endymion parade on its favored route. Councilwoman Cynthia Hedge-Morrell was absent.
The council has the final say on each year’s Carnival parade schedule, and it could, if it wished, overrule the Police Department on Endymion’s route. But it is unlikely to buck a strong recommendation from Riley on what his department can handle. Any differences normally are worked out privately and then ratified by the council.
. . . . . . .
Bruce Eggler can be reached at beggler@timespicayune.com or (504) 826-3320.