Mid-City Neighborhood Organization would like to thank Capital One for their generous support of the Mid-City library branch. 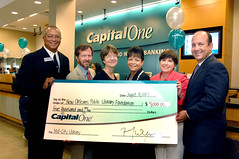 From the Capital One press release:

New Orleans (Aug. 17, 2007) Capital One Bank today announced it has reopened its Mid-City branch location, which has been operating at the corner of Canal and Carrollton streets for 74 years. The branch, located at 4121 Canal St., was one of the first full-service banking locations to resume operations in Mid-City after Hurricane Katrina.
As a further show of its commitment to the neighborhood, the bank also announced a $5,000 contribution to the New Orleans Public Library Foundation. The funds will support the children’s programs in the Mid-City branch of the New Orleans Public Library. The Mid-City library branch, located at 330 N. Carrollton Ave., is one of seven temporary locations operated by the New Orleans Public Library.
Capital One’s Mid-City branch underwent extensive interior and exterior renovations after Katrina. In addition to offering the full array of products and services available before the hurricane, the branch has added two business bankers and an investment representative, and the lobby now is open on Saturday mornings to provide even greater convenience and service for consumers and business clients. 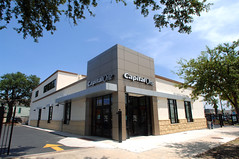 The branch has seven drive-up lanes and three ATMs, including two in the drive-up area.
At Capital One, we’ve reopened branches in every major part of the city, including areas that were heavily impacted by widespread flooding following Katrina, said Hugh Hamilton, Greater New Orleans regional chairman for Capital One’s Banking segment. We have had a banking presence in Mid-City since 1933. As more residents, families and businesses continue to return to this historic area of New Orleans and other parts of the city, they should know that Capital One is there to help them with their financial needs.
The branch has 18 associates the same staff size as before the storm. The reopened location also welcomes the return of longtime associates Deborah Larkins, Mid-City assistant branch manager who has worked for the bank for 31 years, and senior teller Zuleta Landry, who has been with the bank for 20 years. The branch manager is Kevin Wynne.
The branch lobby is open Monday through Thursday from 9 a.m. to 4 p.m.., Fridays from 9 a.m. to 6 p.m., and Saturdays from 9 a.m. to noon. Drive-up service is available 9 a.m. to 6 pm on weekdays and 9 a.m. to 1 p.m. on Saturday.

Here’s a scan of the bank building as it looked back in the 1960s (click to enlarge): 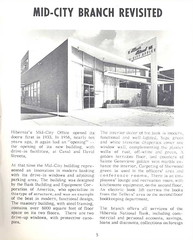