Delayed by ten minutes, the crowd outside of Angelo Brocato’s Italian Ice Cream parlor didn’t seem to mind one bit. After all, what was another fraction of an hour compared to over a year?
The line wound up Carrollton street toward Canal continuing for a block, as soon-to-be customers waited in line for an hour and longer to see the Mid-City icon reopen its doors.
Mid-City residents were there, but so were people from the Northshore and a family from Memphis, who had planned their trip to New Orleans to visit their children around the Brocato’s opening.
Box after box of pastries made their way out the door, along with cups and cones of dripping Brocato’s gelato. In typical New Orleanian fashion, waiting customers didn’t envy those proceeding toward their vehicles. Instead, those in line reveled in those already possessing the Italian treats, cheering them on as each emerged from the air conditioned pastry/ice cream shop.
The shop itself is back to its remodeled self: tables back where they belong and along the dais in the back of the store where baked goods used to crowd glass display cases. Those cases are now next to the ice cream.
We are New Orleans. Why else would the opening of a small ice cream shop make such a big deal?
On this day, there were more smiles in Mid-City than have been seen in a long time. 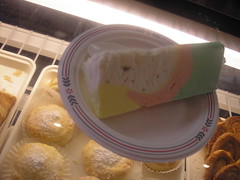